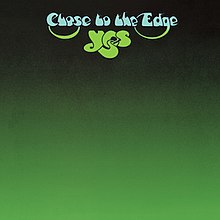 When I first heard the Yes album Close to the Edge back in the seventies, I was astounded. I had grown up with rock ‘n’ roll and its usual chord progressions: C, Am, F, and G. I had even played in a band where we got a good amount of usage out of those four chords. (Full disclosure: we once recorded a song in B♭, I guess to be annoying. It worked: nobody bought it.) But hearing a group like Yes drift easily from time signature to time signature and symphonic sound to symphonic sound, I began to realize that there was a lot more to pop music than I had imagined before, and that the market for sophisticated and complex song patterns was out there. Unlike my B♭endeavor, people loved “I’ve Seen All Good People/Your Move,” that little symphony in two movements, and made “Roundabout” a big hit. And when MTV magically appeared in the eighties, Yes responded with “Owner of a Lonely Heart” and “Final Eyes.” They had weathered the storm of the pretty young visual bands and gone right on with their music.

Of the five original members, only guitarist Steve Howe remains active, and even he is only “original” in the sense that he came aboard in 1971 before the band achieved any measure of fame. Bassist Chris Squire who appeared on every Yes release, passed away this year. In many ways he was the heart and soul of the band, though people still think highly of long-time percussionist Alan White and that singer with the high voice Jon Anderson. When Squire died this past June, people lamented the fact that he hadn’t lived long enough to see his band enshrined in the Rock ‘n’ Roll Hall of Fame. Some claimed that out of respect for Squire, perhaps this was the year the committee would choose not to pass them by as they have done every year.

Yesterday the new inductees were announced: Yes was not among them.

I have no kick against these new inductees: Cheap Trick, Chicago, Deep Purple, NWA, and Steve Miller. I still find myself inexplicably humming “My Woman from Tokyo” (or is that To-Kay-Oh?) an awful lot. https://www.youtube.com/watch?v=b-ScDz4Vj98. And I don’t think Yes should have been inducted merely as a sympathy nod. I just think the committee screwed up, and has done so for such a long time that it has become easy for them. Of course like all halls of fame, the people selected will not be everyone’s choice. I just wanted to register a quiet complaint and let it be known that on my next trip to Cleveland, I will avoid the Rock ‘n’ Roll Hall of Fame at all cost. And I do go to Cleveland. (The last time, I believe, was 1961.)

As a more positive approach, I plan to spend the day listening to Yes music on Spotify. If we all do that today, some bean counter somewhere will notice…and maybe next year….